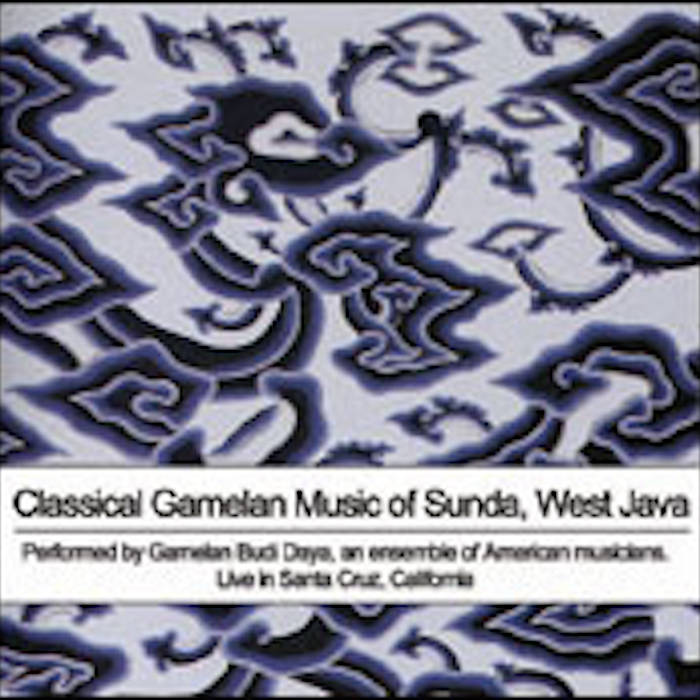 Gamelan is the traditional gong orchestra of Indonesia and Malaysia. A gamelan ensemble may include various combinations of large hanging gongs, rows of kettle-gongs, barrel-shaped drums, metal-keyed instruments, wooden xylophones, and sometimes flutes and string instruments. Over time gamelan has developed, in its many forms and regional styles into one of the world's most sophisticated musical arts.

Indonesia is the world's largest archipelago, with some 13,000 islands spread over 3,000 miles of ocean. On the Indonesia island of Java (thought by many scholars to be the original home of gamelan music) the tradition is an ancient one, the first orchestra dating back to 230 CE according to legend. Temple carvings depicting gamelan instruments first appeared in the 8th century.

Today gamelan is played to accompany traditional dance, puppet theater, or as listening music. It is festive music and is played in royal palaces, humble villages, and private homes. The music is felt by many to be sacred, and is at once a spiritual, sensual, and social experience - enjoyed by people of all ages and backgrounds.

Gamelan pieces are cyclic in nature, with a stroke of the large hanging Gong marking the end of one melodic cycle and the beginning of another. The cycle is repeated in order to fully unfold the spirit of the particular piece. Group dynamics in terms of volume, tempo, and density, as well as individual improvisation and embellishment, are very important parts of bringing the music to life. Playing gamelan music is said to bring blessings to the musician and listener alike.

The Sundanese people of West Java, Indonesia have a long and rich musical tradition. Indigenous gong orchestras such as the archaic village Goong Renteng and the courtly Degung, in addition to the ethereal Kacapi-Suling flute and zither ensemble, are but a few examples of the amazing array of traditional Sundanese musical styles.

Recordings of Sundanese Gamelan are relatively rare, especially compared to the more well-known styles from Bali and Central Java. Gamelan (of the type tuned to the 5-tone Salendro and 7-tone Pelog scales) is thought to have come to the southern highlands of Sunda from Java's north coast during the 16th or 17th century, during the period of influence by the ancient Javanese kingdom of Cirebon. (The classical Gamelan of Cirebon is featured on another CD in this series.) The Sundanese adapted the orchestra to their own taste by reducing the number of instruments, increasing the prominence of the drumming, and by favoring the simpler, more cheerful Salendro tuning over the more complex and mystical Pelog scale.

The eight-person ensemble (the number of musicians is quite flexible in Sundanese Gamelan) is more intimate than the much larger and more well-known gamelan orchestras of Central Java and Bali, which can number up to twenty-five musicians or more. Whether it is the soft, dreamlike passages highlighting the delicate tones of the wood-keyed Gambang xylophone and the two-stringed Rebab violin, or the more lively sections featuring exciting Kendang drumming and rapid interlocking patterns played on the pair of metal-keyed Saron, the music is always held together by the deep periodic pulses of the one essential instrument of the gamelan - the great Gong.

Every gamelan set has its own unique shading of pitch, feeling, and texture, and thus its instruments cannot be played with those from another set. The instruments of Gamelan Budi Daya were hand made by master gong smith Mang Ewok in West Java in 1978. Fashioned from iron and brass, they were tuned by ear to the Sundanese Salendro scale, similar to the Slendro scale of Central Java but considerably lower in range. They are also physically smaller, giving the music the more delicate sound favored in West Java.

In accordance with tradition, a personal name was bestowed on our gamelan after its completion: Budi Daya. Loosely translated as "The Power of Wisdom", the name was felt by the gamelan maker to express the feeling of the instruments of the new orchestra, and by the sound of the great Gong in particular.

Gamelan in Sunda is usually played to accompany traditional dance or the Wayang Golek rod puppet theatre. However, there is also a long-stranding Sundanese tradition of Kliningan, or listening music. This style tends to emphasize soft-style playing and relies somewhat less on the strong drumming so prominent in puppet and dance accompaniment. Some of the pieces selected for this recording are quite old, and are rarely heard these days.

Dedicated to our dear friend - and superb musician - the late Sean Lohman.